Gingivitis and Your Overall Health 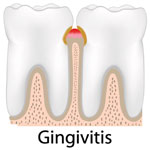 Gum disease is a progressive dental condition that affects a large percentage of our population. It begins slowly, and often without very much of a warning, making it a condition that is easily overlooked in its earliest stages. In fact, the first stage, known as gingivitis, might only consist of mildly inflamed gums and occasional bleeding.

Your periodontist will want to know about the mild symptoms, however, because they are often the precursor to more serious and more destructive oral health problems.

The inflammatory process that is known as gingivitis is an early warning sign that your body is struggling to ward off the irritants that cause gum infections. High levels of bacterial plaque and tarter buildup are often the triggers, although the inflammation can sometimes be attributed to other factors. Swelling, bleeding, and redness might also be due to dry mouth, medications, hormonal changes, and even severe stress.

Without the appropriate treatment, the mild symptoms of gingivitis can spread and destroy the gums, bones, and ligaments that are essential to the support of your teeth. This is a leading cause of tooth loss, and the infection has also been shown to impact your overall health as well.

The body’s response to chronic inflammation can reduce your ability to fight off other illnesses and infections. It has also been shown to complicate the health of diabetic patients and those patients with cardiovascular disease. Gum disease can increase your risk for a stroke or a heart attack, and it can even affect the outcome of a pregnancy. Premature labor and underweight babies have been linked to severe, untreated periodontal disease.

Fortunately, when your periodontist can diagnose the cause and the extent of your gingivitis, your oral health can be improved and the progression of the disease can be stopped. To get your treatment underway, start by scheduling a consultation and a comprehensive examination including a periodontal evaluation and x-rays.

Call the office of Drs. Susan Karabin and Edward Gottesman at 212-756-8890 to reserve your appointment today.

How can I tell if I have gingivitis or gum disease?
Common Misconceptions About Dental Health
Can gum disease treatment also improve the health of my arteries?
Signs and Symptoms of Periodontal Disease
Help Your Family Maintain Good Oral Health

This entry was posted in All, Blogs, Mouth-Body Connection, Periodontal (Gum) Disease. Bookmark the permalink.

Back to Top of Page